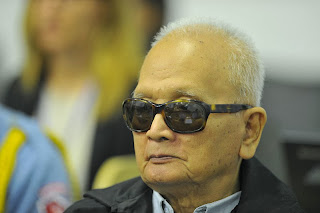 Bringing alleged war criminals to justice decades after the event is never a straightforward process, and it has proved particularly difficult in Cambodia, where up to 2 million people, a quarter of the country’s population at the time, perished during Pol Pot’s 1970’s reign of terror.

Last month, the last two surviving leaders of the Khmer Rouge regime made closing statements at their trials. ’Brother Number Two’, 87 year old Nuon Chea (pictured) and Khieu Samphan, aged 82, the regime’s head of state, both deny crimes against humanity. A verdict is expected early next year, and they are still due to face genocide charges at some future date.

Nuon Chea expressed remorse for the suffering endured by the Cambodian people, but blamed it all on subordinates. The only leader convicted so far is Kaing Guek Eav, known as Duch, who admitted charges against him. (see my blog of 26 July, 2010) Another defendant, Ieng Sary, died in March, while his wife was ruled unfit to continue her trial. (see my blog of 16 March)

The country’s prime minister, Hun Sen, was himself a Khmer Rouge battalion commander, and the government has often seemed less than enthusiastic about  the court, but more than 100,000 Cambodians have attended the hearings.

Posted by John Withington at 18:30