Oh my prophetic soul! This is what I wrote before the 2019 general election when I warned people not to vote Conservative. Much of the personnel has changed, but the disaster remains.

Electionwatch: pity Conservatives - they have no one to vote for 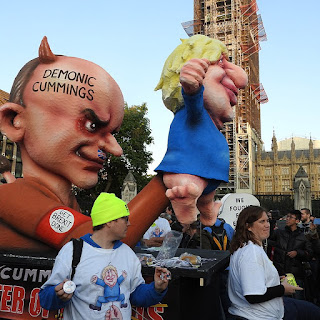 Conservatism, according to the Oxford English Dictionary means ‘commitment to traditional values and ideas.’ So neither Boris Johnson nor any of the maniacally nodding acolytes lining up as Tory candidates are Conservatives.
Johnson is not a detail man and has only a very tenuous grasp of facts, as numerous interviews have shown, which means he needs people to work out policies for him. So the person running 10 Downing Street’s policy unit is very important. And who is she? Step forward Munira Mirza, a ‘former’ member of the Trotskyite Revolutionary Communist Party, who has been helping to write the Tory manifesto.
Perhaps that explains its attacks on democracy on the now-notorious page 48, with its threats to undermine the independence of parliament and the judiciary and to elevate the prime minister above the law.
Even more important than Mirza is ‘Johnson’s brain’, Dominic Cummings, who has never denied that he is not a Conservative. Indeed, Cummings seems to be consumed with contempt for anyone who is not Dominic Cummings.
He was formally ruled to be in contempt of parliament because he refused to be questioned by a committee investigating fake news. Cummings has a particular disdain for our politically independent civil service and wants to abolish it. Civil servants have an infuriating habit of telling the truth.
And then there were those three mysterious years in Russia. Of course, the degree to which Boris Johnson and his party are under Putin’s thumb remains shrouded in mystery because Johnson is suppressing the official report that might shed some light on it. But what was Cummings doing while he was there? What links did he form with politicians and the security and intelligence services?
The modern Conservative Party is decidedly not conservative. A better label would be 'anarchist' or 'nihilist'. More than anyone they remind me of the 19th century left-wing Russian extremist, Mikhail Bakunin, who said he would be happy only ‘when the whole world is engulfed in fire.’ He advocated smashing everything up in the hope that something better would arise to replace it.
Just so for today’s Tories: smash up the UK, the NHS, our links with the EU, Parliament, the judiciary, the civil service, your jobs, rights, opportunities, etc. And maybe a phoenix will rise from the ashes: perhaps a hyper-Thatcherite capitalist paradise, red in tooth and claw, with no nonsense about a welfare state or workers’ rights or the rich paying tax?
If you really have nothing to lose, you might consider voting Conservative. If you have ANYTHING to lose, think very, very carefully before you put the nihilists into power.
Posted by John Withington at 16:37 No comments: