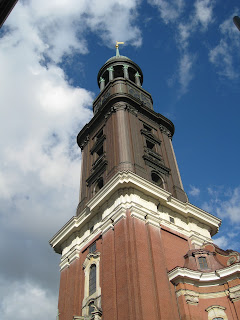 I was in Hamburg recently, and managed to pop into the wonderfully light and airy St Michael’s Church.  The inside reminded me a bit of St Martin-in-the-fields in London.    Originally constructed in 1647, it was destroyed by fire 103 years later after being struck by lightning.


It was rebuilt, but in 1906 it was burned down again, this time while building work was going on.  Then it was severely damaged by Allied bombing during World War Two.
In July 1943, Hamburg was hit by what was then the most devastating raid of the war.   The RAF started a firestorm which reduced eight square miles of the city to blackened ruins.   About 42,000 people were killed, and Hitler’s minister for war production, Albert Speer, told the Fuehrer that if another three or four cities were bombed like that, it would mean ‘the end of the war’.
* Here’s a new review of my book Disaster!  ‘as much fun as any horror film’ – I take that as a compliment.
http://www.readprint.com/work-105455/Disaster-A-History-of-Earthquakes-Floods-Plagues-and-Other-Catastrophes-John-Withington
And this is me on the tv in the 1970’s:-
http://www.macearchive.org/archive.html?Title=23745
Posted by John Withington at 12:40 No comments:

Turkey’s second major earthquake of the year has now claimed at least 575 lives.   It struck the eastern town of Ercis, which has nearly 100,000 inhabitants, on Sunday.   More than 180 people have been pulled from the wreckage, including a 13 year old boy in the early hours of yesterday, but now hopes of finding anyone else alive are fading.
Tens of thousands of people have been made homeless, and the nights are freezing cold.   Most of those living in the region are Kurds – an ethnic minority that has been battling to have its own country - and the Turkish government had been criticised for what some saw as a sluggish initial response.
I was in Istanbul at the time of the last earthquake in May, which struck the western Kutahya region, about 100 miles away, killing two people.    Some people in Istanbul said they felt the tremor, though I did not.
Perhaps the worst earthquake in Turkey’s history was the one that destroyed the famous city of Antioch in 526, killing up to 300,000 (see my blog of Jan 22, 2010).   The deadliest of recent years was the Izmit quake of 1999, which caused at least 17,000 deaths in the area, about 40 miles from Istanbul.
Posted by John Withington at 14:40 2 comments:

Britain’s Disasters Emergency Committee has announced that it has raised a record sum to help famine victims in Somalia.     The £72 million donated is the highest ever for a food crisis, and the only disasters of any kind to have attracted a bigger response were the Boxing Day tsunami of 2004 and the 2010 Haiti earthquake.
DEC’s chief executive said the money had saved many people’s lives, but that the situation produced by a devastating drought remained ‘grave’, and that help was not reaching many of those in greatest need.
Relief work has been hampered by the militant Islamist group, al-Shabab, which is affiliated to al-Qaeda (see my blog of July 21), but now rains have revived pasture for livestock in some areas, and some crops are being harvested.
Aid agencies had been afraid that the actions of Somali pirates might discourage people from making donations.    They have kidnapped a number of foreign tourists, including a 56 year old British woman, Judith Tebbutt, who was abducted from 25 miles inside Kenya.    The pirates murdered her husband.
Posted by John Withington at 10:31 No comments: 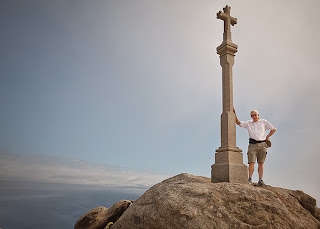 Pic by Anne Clements.  See her other lovely work http://www.flickr.com/photos/clemypix/page1/
Posted by John Withington at 15:48 No comments:

More than 250 people have now been killed in the monsoon floods that have been affecting Thailand for the last two months.    Twenty-eight provinces have suffered, and more than two million people have had their lives disrupted.
These are said to be the worst floods in half a century, and the Prime Minister has warned that parts of Bangkok will soon be under water.     In some areas, people have been told to beware of crocodiles which have escaped from farms.
Last year saw monsoon floods across 38 provinces of Thailand, and more than 230 people were drowned, while millions more lost their homes and their livelihoods.
This years’s floods have also killed 167 people in Cambodia, and another 40 in Vietnam and Laos.
Posted by John Withington at 18:53 No comments:

Six scientists from the Italian National Institute of Geophysics and Vulcanology and the former deputy chief of the Civil Protection Agency, Bernardo De Bernardinis , have gone on trial for manslaughter in Perugia in connection with the earthquake that hit the medieval city of L’Aquila in  2009, killing 308 people, and destroying thousands of buildings.
For months, people living in and around the city had been experiencing earth tremors, but on March 31, 2009, Dr De Bernardinis told them there was ‘no danger’.  Six days later the earthquake struck.
The prosecution claims the seven were negligent in their assessment of the risks, and that the reassuring comments made by Dr De Bernardinis and a vulcanologist resulted in the deaths of people who would otherwise have left their homes after two tremors on successive nights just before the quake.
Some scientists have said that the case will have a ‘chilling effect’, and might deter them from sharing their expertise with the public for fear of the consequences if things go wrong.   (See also my blog of April 6, 2009.)
Posted by John Withington at 08:15 No comments: