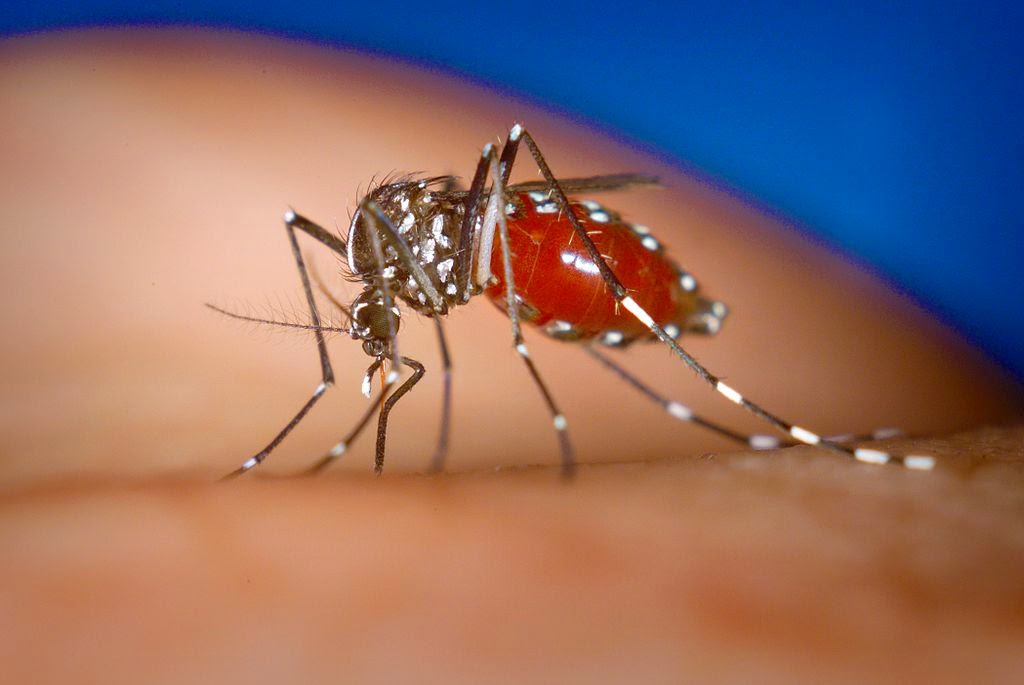 Chikungunya fever, like dengue, tortures sufferers with severe pain especially in the joints. Spread by the same mosquitoes that transmit dengue, it is common in Africa and Asia, but is now extending its presence alarmingly.

First detected in the Caribbean in December on St Martin, it has now spread to 15 other countries there. More than 4,500 cases have been confirmed, though health officials admit there may be thousands more. Haiti has more than 1,500 cases.

The disease probably crossed the ocean in the blood of an infected traveller. It has also reached French Guiana and Florida. Chikungunya is less lethal than dengue, but there are fears that it could leave victims with long-lasting arthritic pain in the joints.

Local people are being urged to get rid of puddles or containers holding water where mosquitoes thrive, while travellers are being told to wear long trousers, long-sleeved shirts and socks, and to use insect repellent.
Posted by John Withington at 10:51 No comments:

The death toll in the mining disaster at Soma in Western Turkey has now passed 300, and the energy minister has said there may be more bodies to be recovered. 485 miners are reported to have escaped or been rescued.

Police had to use tear gas and water cannon to disperse protesters complaining about safety standards and demanding that the government resign. Lawyers who came to advise victims’ families have been detained.

One survivor claimed inspectors never visited the lower reaches of the mine, but the government said it had been inspected ‘vigorously’ 11 times since 2009. A report in 2010 said the Turkish mining industry had the highest death rate in the world per million tons of coal extracted – 5 times the figure for China, and 360 times that for the United States.

The deadliest mining disaster in history happened on 26 April, 1942 at Honkeiko in the Manchuria region of China, while it was under Japanese occupation. 1,549 miners perished after an explosion, and the Japanese were heavily criticised for closing down the ventilation system and sealing the pithead, condemning many of the victims to death by suffocation.

*Review of the Romanian edition of A Disastrous History of the World. http://www.gds.ro/Util%20si%20Placut/2014-05-05/Cele+mai+mari+dezastre+din+istoria+omenirii
Posted by John Withington at 15:36 No comments: 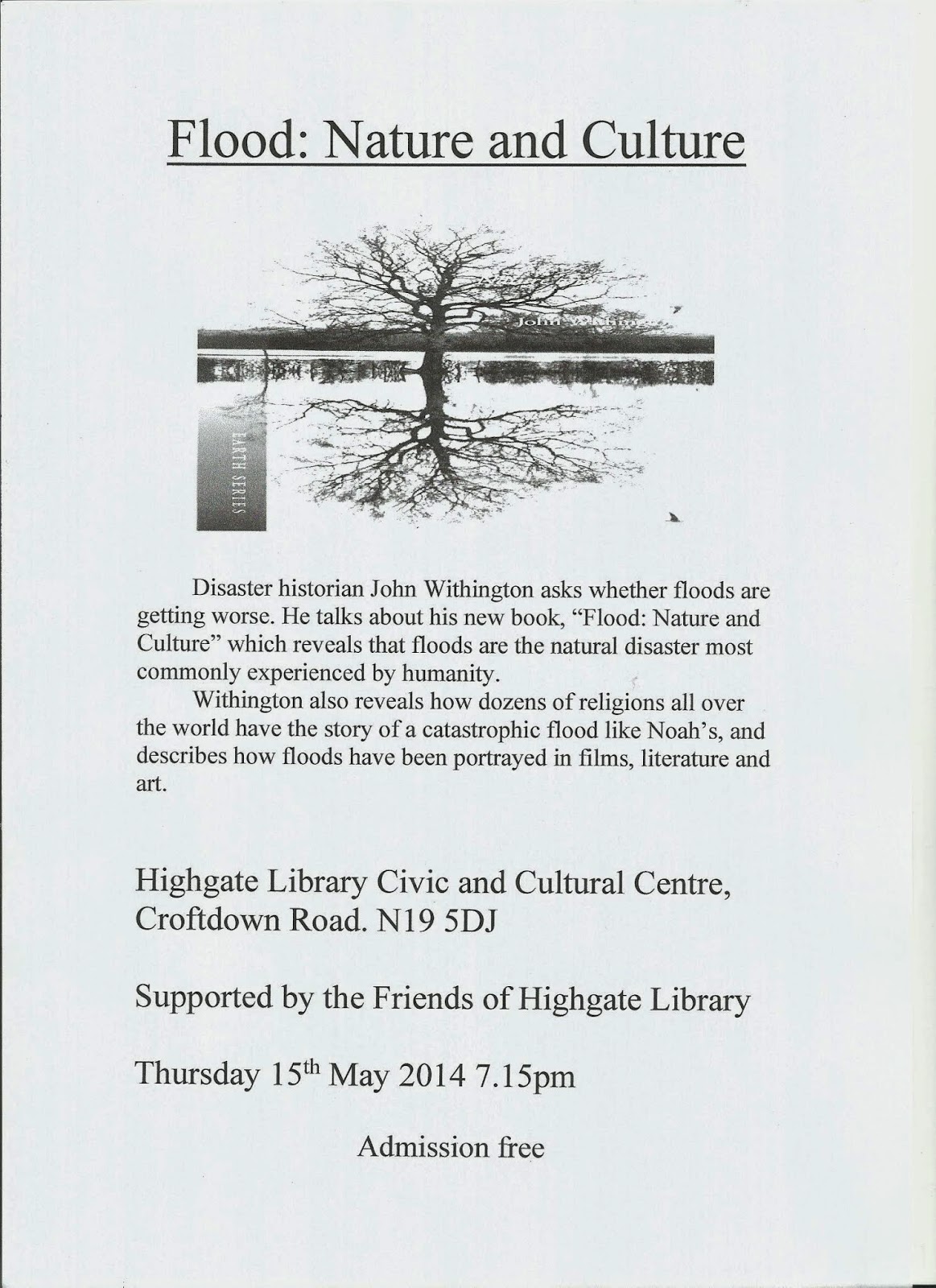 Reminder. Tonight at 1915, I'll be giving a free talk on my book Flood: Nature and Culture (Reaktion Books) at Highgate Library Civic and Cultural Centre, Croftdown Road, London N19 5DJ.  All welcome.
Posted by John Withington at 09:50 No comments:

Who remembers the Armenians? Many people

‘Who remembers the Armenians?’, Hitler is supposed to have asked scornfully as he prepared to invade Poland in 1939, referring to the deaths of perhaps 1m people during the First World War at the hands of the Ottoman Empire, now Turkey.

Now for the first time, the Turkish Prime Minister, Recep Tayyip Erdogan, has offered his ‘condolences’ over the mass killings. The Turks still reject the idea that they constituted genocide, and Mr Egoyan talked instead of the ‘shared pain’ of the Turkish and Armenian peoples for their losses in World War One.

Even so, the comments are a marked step forward. In 2006, Orhan Pamuk, the first Turk to win the Nobel Prize, was threatened with prosecution for insulting ‘Turkish identity’ when he drew attention to the killings.

At the start of the First World War, after years of inter-communal tension the Turks feared the Christian Armenians might help their enemy, Russia. They began a mass deportation during which perhaps 600,000 were murdered, while another 400,000 died from hardship.

*Tomorrow at Shoe Lane Library, London EC4, 1230 my talk on Flood: Nature and Culture
http://disasterhistorian.blogspot.co.uk/2014/04/talk-on-flood-nature-and-culture.html
Posted by John Withington at 19:00 No comments:

Did a North Sea tsunami wipe out Doggerland?

Did a tsunami more than 8,000 years ago put paid to the last inhabitants of Doggerland, a submerged land mass which once connected north Germany to East Anglia?

Around 10,000 years ago, it was still one of the richest hunting grounds in Europe, but 2,000 years later, it had become a low-lying, marshy island about the size of Wales. That was around the time of the Storegga tsunami – generated by a massive landslide beneath the sea off the coast of Norway.

Fishing boats operating around Doggerland have turned up ancient human artefacts, but none date from later than the tsunami. The tsunami theory of Doggerland’s end is based on computer simulations of the effect of the Storegga slide, but some scientists argue the area had already been abandoned before the disaster.

Some, though not all, scientists also maintain that the deadliest flood ever suffered by mainland Britain, the Severn Flood of January 30, 1607, was also caused by a tsunami. It is estimated that 2,000 people, and thousands of livestock animals were killed.

My A Disastrous History of the World has now been translated into Romanian - http://www.polirom.ro/catalog/carte/cele-mai-mari-dezastre-din-istoria-omenirii-5358/
Posted by John Withington at 18:51 No comments: