Ghost boats of the Sea of Japan 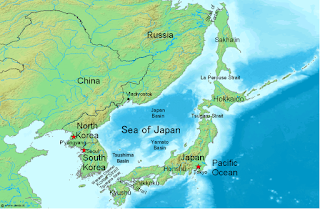 At regular intervals, ghost ships, or more precisely ghost boats about 30 feet long appear in the Sea of Japan. Last November alone, 13 were found drifting, deserted except for dead bodies – a total of 26, many of them already largely decomposed.

There are indications that they are from North Korea – a handwritten sign in one saying it belonged to a unit of the North Korean army, the tattered remains of a national flag, the boats’ dilapidated condition and the lack of equipment.

Were they carrying defectors? Apparently some of those who escaped the closed, repressive regime in the past arrived in such vessels. Or were they fishermen under pressure from their fanatical Communist government to get bigger catches, who strayed too far out to sea?

The last explanation would fit with the regime’s desperation to conceal the scale of North Korea’s dreadful food shortage. In spite of aid from abroad, there has been little improvement in production since the mass starvation of the early 2000s.

*For more on North Korea's famines, see A Disastrous History of the World.

Posted by John Withington at 16:41 No comments: 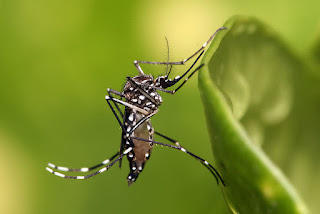 First there was malaria, then yellow fever, then dengue (see my post of 31 July 2013), then it was chikungunya (see my post of 21 May 2014), now it is zika – all of them spread by mosquitoes. In the case of zika, now moving through Latin America and the Caribbean, it is the same mosquito (see picture) that spreads dengue and yellow fever.

If a pregnant woman is infected with zika, it is believed the virus can cause her baby to have an abnormally small head – a condition known as microcephaly, which is often caused by the failure of the brain to develop at its usual speed. Nearly 4,000 such babies have been born in Brazil since October, and 49 have died.

A number of countries including Colombia, Ecuador, El Salvador and Jamaica, have advised women to delay becoming pregnant until more is known about the disease, which was first identified in Africa in the 1940s. Some believe it was introduced to Brazil during the World Cup in 2014.

There is no known cure for zika, and the only way to prevent it is to avoid being bitten by the mosquitoes that carry it. In Brazil, they are working to clear stagnant water where the insects breed.
Posted by John Withington at 10:43 No comments:

A fatal stampede in London - 129 years ago today

On this day……129 years ago, a panicked stampede cost the lives of 17 people at the Hebrew Dramatic Club in London’s Spitalfields.

The club had a tradition of putting on ‘benefit’ performances to raise money for members in difficulties, and about 400 people were attending one on 18 January 1887. A group of young men in the gallery tried to get a better view of the show by hauling themselves up on a gas pipe.

The pipe fractured, and as the audience smelt gas, a cry of ‘Fire!’ went up. As the gas was turned off, and the hall plunged into darkness, terrified people ran for the exits, falling over chairs and each other. The staircase from the gallery in particular became packed with a desperate mass of struggling humanity.

16 of the victims, mainly women and children, were crushed to death, while a 70 year old man died of a heart attack trying to rescue his wife. For more details, see London’s Disasters.
Posted by John Withington at 10:46 No comments: 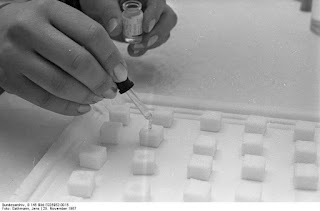 There are only two countries in the world where polio is still endemic – Afghanistan and Pakistan. In Pakistan, Muslim extremists are helping it to go on killing and paralysing children by murdering vaccination workers.

In the latest attack this week, at least 15 people were killed by a suicide bomber at an inoculation centre at Quetta in Balochistan. It happened just as medics and the security staff who are needed to protect them had reported for duty before going out on their rounds. Another 20 people were injured.

There were more than 300 cases of polio in Pakistan in 2014, the highest number since 1999, following a series of attacks by extremists. Last year, energetic efforts by the security forces enabled the vaccine teams to penetrate what had previously been no-go areas, and the number of cases fell to 50.

The fanatics claim immunisation is a Western plot to sterilise Pakistani children. As a result of the latest bombing, the vaccination programme in Balochistan has been suspended. (See also my posts of 24 February, 3 March, and 10 December, 2014.)
Posted by John Withington at 18:11 1 comment: 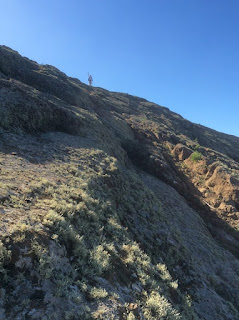 Just back from the delightful island of Lanzarote (I am the tiny speck at the top of the volcanic crater.) This caldera is quite green, but much of the island is covered in jagged, barren solidified lava.

It was produced by six years of volcanic eruptions from 1730 to 1736. Nowadays the volcanoes are classified as dormant, but at Timanfaya National Park enough heat rises from the ground to start a fire, boil water, or cook chicken.

A priest who saw the eruptions begin in 1730 described the scene: ‘an enormous mountain emerged from the ground with flames coming from its summit. It continued burning for 19 days.’ Fortunately no one was killed, but a number of villages were buried as much of the most fertile part of the island was covered in lava, while dead fish were washed up on the beaches.

The eruptions created over 100 new volcanoes, and there were further but smaller eruptions in 1824.

Posted by John Withington at 16:13 No comments: