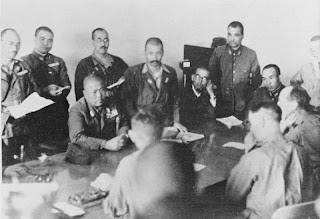 For Winston Churchill, it was ‘the worst disaster and largest capitulation in British history’.   Before World War Two, Britain had spent the then vast sum of £60m turning the island of Singapore into a supposedly impregnable fortress at the end of the Malayan peninsula – at that time also a British colony.


On December 8, 1941, the Japanese landed at the northern end of the peninsula, and though they were heavily outnumbered, they fought their way down it remorselessly, until by the end of January 1942, they had conquered the whole peninsula without the British scoring a single significant victory.


Now the defenders blew up the causeway that linked Singapore to the mainland, but on February 8, the Japanese launched an invasion.   Just as they had in Malaya, they outfought and outmanoeuvred the defending forces, using their air supremacy to deadly effect.


Just a week later, 85,000 British and British Empire forces surrendered to the 35,000 Japanese invaders.    The Japanese had lost only 3,500 men in the conquest of Malaya and Singapore – then the greatest city in south-east Asia.
Posted by John Withington at 07:19 No comments: 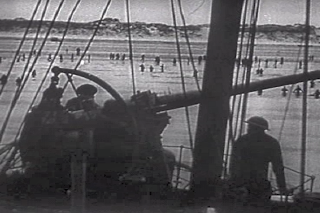 Just 21 years after the end of World War One (see my blog of Jan 22), the British army was back in France to fight the Germans.     This time the problem was not a bloody stalemate, but the speed and daring of enemy forces who completely outmanoeuvred the Allies.
In May 1940, German panzers attacked through the Ardennes, and advanced 200 miles in just 10 days, reaching the Channel coast, and cutting off the British Expeditionary Force in northern France.   There followed a series of desperate rearguard actions as Lord Gort’s army tried to secure a line of retreat to the ports.
Many French and British soldiers fought bravely, as Boulogne was surrendered, then Calais fell, while Belgium’s capitulation left a dangerous gap in the Allied line.    In the end, Dunkirk was the only port left, and even that was under constant German attack.
There then followed the most successful part of the whole operation, with nearly 200,000 British and 140,000 French and Belgian troops rescued from the beaches.    But Churchill recognised the campaign overall had been a ‘colossal military disaster’.   The BEF had lost almost all its equipment, and 66,000 men had been killed, wounded or captured.
Posted by John Withington at 09:53 No comments: 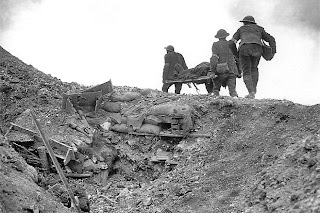 On Saturday, 1 July, 1916, British, British Empire and French soldiers launched a huge offensive on the Somme.    By the end of that day, nearly 20,000 British soldiers were dead, and 36,000 wounded – the worst toll for a single day in the history of the British Army.


When rotten weather and cloying mud finally brought an end to the Battle of the Somme in November, Britain and the British Empire had suffered an almost unimaginable 400,000 casualties, the French had lost about 200,000, and the Germans perhaps 450,000.


Of all the disasters featured in this series, this is the only one sometimes claimed as a victory.   It is said that this bloody attrition fatally drained German resources and paved the way for the Allies to finally win the war two years later.


The ground gained was negligible.   Nowhere did the Allied line advance more than six miles, and many objectives due to be taken on the first day were never captured, nor did the Allies liberate a single town or gain a single strategically significant point.

For the full story, see Britain's 20 Worst Military Disasters from the Roman Conquest to the Fall of Singapore.
Posted by John Withington at 11:48 No comments: 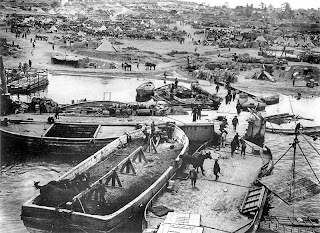 The attack on Turkey’s Gallipoli peninsula by Britain and France in 1915 was conceived as a way of getting round the bloody stalemate of the Western Front, which was devouring soldiers’ lives at an almost unimaginable rate.


The initial idea was for warships to breeze through the Dardanelles straits into the Sea of Marmara, threaten Constantinople and force Germany’s Turkish allies to pull out of the war, but as the navy failed to make progress, it was decided that a major land invasion would also be needed.


Suffering uninspired leadership and handicapped by extremely difficult terrain, this quickly degenerated into a murderous deadlock that looked disconcertingly similar to what was happening in Flanders.


After 11 months, with 38,000 British and British Empire troops killed, the invasion was abandoned.  It was feared that the withdrawal would entail heavy losses, but, in fact, this proved the most successful part of the operation.   A brilliant campaign of deception involving rifles firing automatically from deserted trenches, and noisy empty supply trucks running back and forth at night, enabled the pull-out to be made without any significant casualties.
Posted by John Withington at 11:44 No comments: 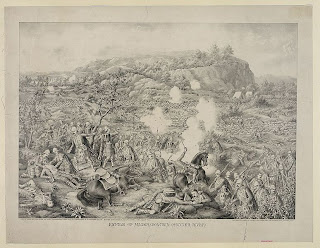 
Finally on December 15, Buller himself led 20,000 men against about 8,000 Boers at Colenso in an attempt to cross the Tugela River.   Again the attack was muffed, and the British had to retreat having lost 143 men killed and about 1,000 wounded or captured, while the Boers were said to have suffered only 8 men killed.
Posted by John Withington at 10:18 No comments: 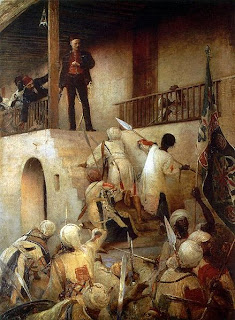 General Charles George Gordon was one of the loosest cannons ever to infiltrate the highest echelons of the British army.   The peace-loving Prime Minister, William Gladstone, should really have known better, but in January 1884 he hired Gordon to organise the evacuation of Egyptian garrisons from the Sudan.


In Egypt, Britain called the shots, but Sudan was a greyer area, and for more than two years, a local leader known as the ‘Mahdi’ had been on a mission to purify Islam and take over the country.


Instead of evacuating the capital, Khartoum, Gordon mounted a dramatic stand that lasted for 342 days, at the end of which the general and many others in the city were killed.   A British rescue expedition arrived just two days later, but beat a hasty retreat before the Mahdi’s overwhelming numbers.


Gordon’s ordeal was followed intently by people all over the world, and when it ended, it was Gladstone who got the blame.    His previous nickname – G.O.M. – ‘Grand Old Man’ was modified to M.O.G. – ‘Murderer of Gordon’.
Posted by John Withington at 17:30 No comments: