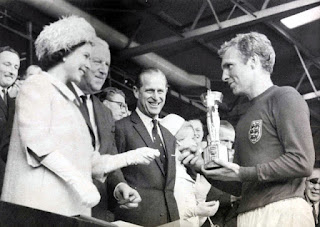 I was there. At Wembley the day England beat West Germany in the World Cup Final. What I think I am seeing now is the best England team since that day. It may lack individuals as outstanding as some from the years in between - Bryan Robson, Gerrard, Rooney, Gascoigne, but as a team it has cohesion, and the squad has depth that allows an impressive manager to rest players and to adjust selection to the differing challenges posed by different opponents.

Some parallels with 1966 strike me. (The structure of the tournament was the same then, except there was one game fewer - no round of the last 16. If you qualified from the group you went straight into the last 8.)

1. England did not concede a goal until the semi-final.

2. England started slowly, but improved as the tournament went on.

3. The toughest game until the semi-final was the first in the knock out stage. Against Germany this year. A narrow 1-0 win against Argentina in 1966 after the Argentines had had a man controversially sent off.

5. In 1966, England played all their games at Wembley. This year they have played all but one there.

6. In the finals, they met probably the best team in the tournament excluding England. In 1966, it was West Germany, with England coming out winners 4-2 after extra time, amid controversy over 3 of the England goals. The first came from a free kick taken while the referee seemed to be still ticking off a German defender. The third was the famous 'did-it-cross-the-line?' shot from Geoff Hurst, and play should have been halted before the fourth, as there were spectators on the pitch.

And so to tomorrow. Good luck, England!

Posted by John Withington at 11:24 No comments: