The Lancastria - a forgotten disaster 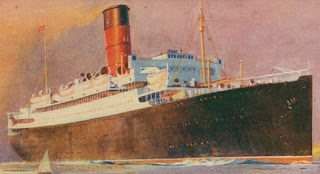 On May 19, I blogged about the sinking of the Wilhelm Gustloff during World War Two, which resulted in the deaths of around 9,000 German civilians, soldiers and sailors. Now a campaign has been launched in the UK to properly commemorate the sinking of the British liner, Lancastria (pictured) off the French port of St Nazaire in June 1940.

The ship was carrying up to 9,000 British soldiers and French and Belgian refugees when it was attacked by German bombers the day before France surrendered to the Nazis. It is thought that about 4,000 drowned.

Today people such as General Lord Dannatt, former head of the British army, the actress Joanna Lumley and the author Louis de Bernieres say the British government should do more to preserve their memory, describing the loss of the Lancastria as a ‘forgotten disaster’.

They want the government to designate the wreck an official war grave, and they refer to reports that some documents relating to the disaster are still being kept secret. The government says the wreck is already protected under French law, and that all ‘contemporary’ documents have been released.
Posted by John Withington at 10:07 No comments: 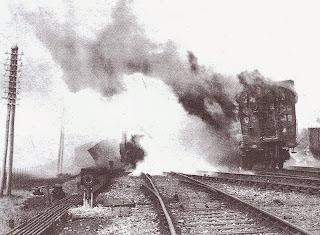 Tonight at 2100 the BBC4 tv channel will tell the story of Britain’s worst ever rail disaster, which happened 100 years ago tomorrow. It was a three train pile-up during the First World War at Quintinshill near Gretna on the West Coast main line early on the morning of 22 May 2015, in which about 226 people died, most of them soldiers on a troop train.

The troop train was carrying about 500 men south on the first leg of their journey to Gallipoli. It was made up of gas-lit wooden coaches. Congestion in the area that morning meant that a local train was being held stationary on the main line.

The troop train ploughed into it, and then shortly after, a sleeper coming up from the south ran into the wreckage. The carriages of the troop train were soon alight, the blaze spreading with nightmare speed.

Two signalmen were blamed for the crash. One was sentenced to three years’ hard labour, and the other to 18 months in gaol, but pre-publicity for tonight’s programme suggests it may have new information on the causes.

For more on Quintinshill, see A Disastrous History of Britain.
Posted by John Withington at 10:34 No comments:

The Wilhelm Gustloff - the worst ever maritime disaster 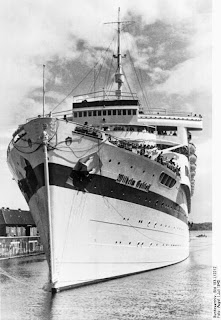 The Narrow Escapes of World War Two series on the Yesterday tv channel this week featured the worst maritime disaster in history. On the night of 30 January 1945, the German cruise liner, the Wilhelm Gustloff was carrying more than 10,000 refugees, soldiers and sailors, packed like sardines, trying to escape the advancing Red Army.

The vessel was heading along the Baltic coast from Gdynia in what was still occupied Poland towards Kiel when it was hit by three torpedoes from the Russian submarine, S-13, about 20 miles off shore.

The captain had reluctantly put on the ship’s navigation lights in order to avoid a collision with German naval vessels in the area, and this had made it a highly visible target for the submarine. In the resulting nightmare with icy Baltic water pouring into the ship, some passengers simply decided to end it all, and shot themselves.

A few people managed to get into lifeboats, and about 400 were picked up by a German destroyer, but altogether it is thought that no more than 1,000 people survived. For the full story, see A Disastrous History of the World.
Posted by John Withington at 10:42 No comments:

Burundi is in the throes of an attempted military coup. Trouble started when President Pierre Nkurunziza announced he was seeking a third term. Opponents said this breached the constitution, and now rival groups of soldiers are vying for control.

Before the country got independence in 1962, Belgium, the colonial power, had ruled through a Tutsi elite, and after independence, a series of Tutsi military regimes held power. In 1993, the country’s first democratically elected president, a Hutu, was assassinated by Tutsi extremists.

As many as 150,000 Tutsi were killed in retribution. In 1994, another Hutu president, Cyprien Ntaryamira, died in the same plane crash that killed President Habyarimana of Rwanda, the event that triggered the genocide there.  The Burundian civil war dragged on for another decade, until a power-sharing agreement was reached in 2005 with President Nkurunziza, a Hutu, taking charge.

Posted by John Withington at 12:00 No comments: 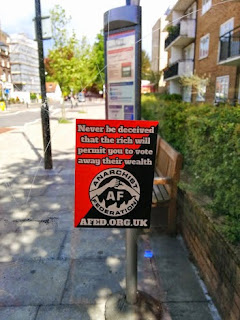 1. The Conservatives have managed three surprise election wins in the last half century – 1970, 1992 and now 2015. Labour have achieved none.

2. The British electoral system is as undemocratic as ever. The Tories now get to rule us even though nearly two voters in three were against them. UKIP won nearly three times as many votes as the SNP, but they got 1 MP while the SNP got 56. So far, the Labour-Conservative coalition has blocked any move towards real democracy, but if Labour begin to feel they no longer benefit from the current unfairness, will they abandon the road block?

3. It was refreshing to see Messrs Miliband, Clegg and Farage accept responsibility for their failures and step down (though Farage rather devalued his resignation by saying he might try to get his job back). Wouldn’t it be wonderful if politicians in power took a similar attitude?

4. There is such a thing as a good election to lose. If Labour had lost in 2005, as they should have done after Iraq, they could have held to account the conspirators who created the war, and made a fresh start, while, through serendipity, the Tories would have been landed with the world economic crisis. Today David Cameron is a hero, but with a tiny majority, he could soon find himself the prisoner of the Tory extremists, and by 2020, he may have lost Britain’s place in Europe, and lost Scotland.

5. They say countries get the politicians they deserve. The Liberal Democrats made many mistakes, but when Britain faced a severe economic crisis in 2010, they put the British people before party interests by going into a coalition that many Lib Dems found unpalatable. The British people responded by giving them the worst electoral drubbing in modern political history. It may be a long time before another party puts the national interest before its own selfish interests.
Posted by John Withington at 12:03 No comments: 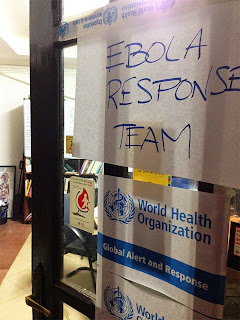 Hopes are rising that the worst of the Ebola epidemic in West Africa may finally be over. Liberia, once the worst affected country, has had no new case since March 27, and it is hoped it will be declared Ebola free this week.

But signs are emerging of a disturbing ‘post-Ebola syndrome’ which seems to be affecting some survivors, who are reporting a variety of symptoms such as loss of sight and hearing. A WHO official said she had come across two people who were now blind.

Other complaints include severe joint, muscle and chest pain, and extreme fatigue. Experts acknowledge that so far the focus has, understandably, been on trying to save people’s lives, and that little research has been done on the disease’s long term effects, so that it is not even clear whether the symptoms reported are caused by the illness or its treatment.

Posted by John Withington at 10:43 No comments: