Syria - a lesson from (recent) history

As Britain plans to embark on its fourth Middle East war in little over a decade, a reminder from Iraq that the one thing you can be sure of when you start a war is that it WILL NOT turn out as you expected.


A series of co-ordinated bombings in Baghdad has killed more than 50 people and wounded dozens more. The bombs were detonated in Shia neighbourhoods during rush hour, and Sunni militants are suspected.


In 2003 Britain invaded Iraq because the government BELIEVED Saddam Hussein had weapons of mass destruction. Now the government wants to invade Syria because it BELIEVES the Assad regime mounted the chemical weapons attack. Sound familiar?


But even if our politicians haven’t learned any lessons, the British people have. An opinion poll shows they want nothing to do with an attack on Syria. MP’s please listen for once.
Posted by John Withington at 15:43 No comments: 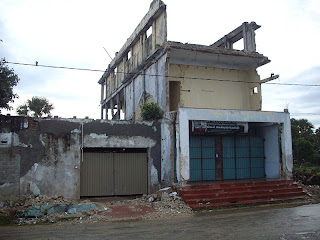 As the Syrian government agrees to allow UN inspectors to visit the site of a suspected chemical weapons attack, the organisation’s human rights commissioner, Navi Pillay, has arrived in Sri Lanka for a fact-finding mission in areas scarred by that country’s long and bloody civil war.


The UN has said that at least 40,000 civilians, mainly Tamils, died in the final months of the conflict in 2009 as the Tamil Tigers were finally defeated. The government was accused of shelling hospitals and refugee camps, but it has resisted international calls for the allegations to be investigated.


Over the last two years, the UN Human Rights Council has passed two resolutions demanding that Sri Lanka launch an independent investigation, while Canada has called for a boycott of a Commonwealth summit scheduled to take place in Colombo in November.


Ms Pillay is expected to hold meetings with members of the Tamil community as well as with the Sri Lankan President Mahinda Rajapaksa, before reporting back to the UN.
Posted by John Withington at 19:26 No comments: 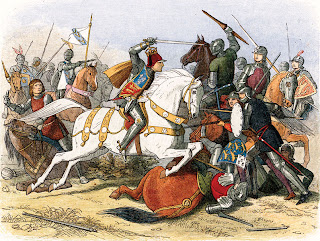 On this day.........528 years ago, the Wars of the Roses ended at the Battle of Bosworth Field, and the victorious army of Henry VII carried the ‘sweating sickness’ with it to London.
The illness, perhaps what we later came to call influenza, would carry off three lord mayors in as many months. Altogether a ‘wonderful number’ of people died, and there were five more epidemics over the next 70 years.
During the 1517 outbreak, there was much comment about the suddenness with which the disease could strike, as people collapsed in the street and were with their maker four hours later, or, as one contemporary put it: they could be ‘merry at dinner and dead at supper’.  In Oxford, 400 people perished in a week.
In 1528, Anne Boleyn caught the disease, and desperately in love with her though he was, Henry VIII packed her off to her home in Kent, where she survived, but her brother-in-law died.  For the full story, see A Disastrous History of Britain.
Posted by John Withington at 17:15 No comments:

How smallpox conquered an empire

On this day…………….492 years ago, the Spanish conquistador, Hernan Cortes, took Tenochtitlán, now Mexico City. Cortes was a commander of extraordinary energy and daring, and he captured the Aztec capital with just a few hundred Spaniards, though it is often forgotten that his army also included tens of thousands of Indians.


And he had a secret weapon more deadly than any of the arms his men deployed so ruthlessly – smallpox. The Aztecs had no resistance to this disease introduced from Europe.


In the crowded streets of the capital, it spread like wildfire. The victims who found themselves covered from head to foot with agonising sores, called it the ‘great rash’. They ‘died in heaps, like bedbugs’, wrote a missionary.


Among those who perished was the Aztecs’ leader, Cuitlahuac. Still they held out heroically for three months, and when the Spaniards finally entered Tenochtitlán, they found themselves walking on the corpses of those killed by smallpox. For the full story, see A Disastrous History of the World. 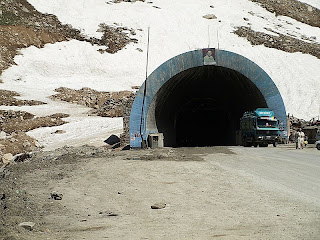 The Americans have been repairing the Salang tunnel in Afghanistan. Nearly two miles long and 11,000 feet up in the Hindu Kush mountains, it was an engineering wonder when it was built by the Soviet Union in the 1960’s. Now it has a leaky roof, a rutted surface, and failing ventilation and lighting.


On November 3, 1982, the tunnel was the scene of one of the world’s deadliest ever road accidents – assuming that it was an accident.


The official Soviet version is that two military convoys collided, causing a traffic jam in which 64 Soviet soldiers and 112 Afghan people were poisoned by carbon monoxide.  Unofficial reports speak of a fuel tanker blowing up, perhaps as a result of an attack by Afghan guerrillas.


It is said that this resulted in a deadly chain reaction of explosions, while the Russians sealed off both ends of the tunnel, trapping hundreds of people inside. In this unofficial version, 700 Soviet troops and 2,000 Afghans may have died.
Posted by John Withington at 17:44 No comments: 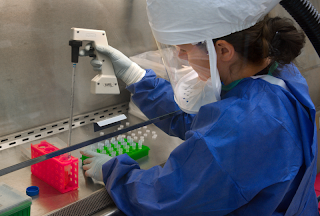