On July 1, I blogged about the role played by lightning strikes in disasters, and on Saturday we saw another, when a Chinese bullet train was struck near the city of Wenzhou.   It stalled, and another train ran into it from behind, killing at least 43 people and injuring another 200.   A four year old child was found alive in one of the carriages 24 hours later.
China’s bullet trains came into service in 2007, with some travelling at more than 180 miles an hour.   In Saturday’s crash, four coaches from the second train fell off a viaduct up to 100 feet high.
Plenty of people are worried about how a lightning strike could cause a disaster on this scale.  Three senior rail officials have been sacked, and an official newspaper has said the crash represented a ‘bloody lesson’ and should be a spur to ‘safer railway standards.’
Public anger seems to go further, though, with 97 per cent declaring themselves unhappy about the government’s response to the accident in an online poll of 44,000, and some blaming official corruption.
Posted by John Withington at 11:01 No comments: 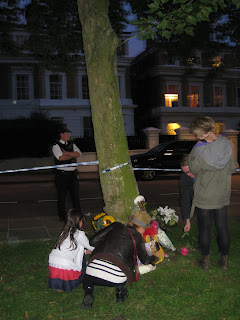 Farewell to my neighbour, Amy Winehouse.   Thanks for the great music, Amy.  RIP.
Posted by John Withington at 08:27 No comments:

The United Nations has officially declared a famine in Somalia, the first since 1992.   Half the population – 3.7 million – are said to be at risk, with another 7 million in Kenya and Ethiopia also in need of help.
As is so often the case in African famines, politics is playing a part.   The Islamist militia, al-Shabab, which is affiliated to al-Qaeda, controls the area where the famine is raging, and two years ago it banned foreign aid agencies.   Even now it is prepared to allow only limited access.
The stricken area had previously included the most fertile part of the country, and the UN says nearly £1 billion in aid is needed.  The USA has said it will send help so long as al-Shahab does not interfere with it, or use it to raise money.
The great Ethiopian famines of the 1970’s and 80’s were also aggravated by politics.   In the first, the Emperor Haile Selassie, responded lethargically (and was promptly deposed), while the second was exacerbated by President Mengistu’s scorched earth campaign against rebels, and his determination that the famine would not spoil a birthday celebration for his regime.
Posted by John Withington at 10:06 No comments:

Mumbai was always regarded as a diverse, tolerant city.   Maybe that is why it has been targeted so often by terrorists.    In Wednesday’s attack, three bombs went off, thought to have been activated by timers, and 18 people were killed.


In 2008, a group of ten Muslim gunmen murdered 165 people in attacks on hotels, a station, and other places frequented by foreigners.   Back in March 1993, more than a dozen bombs made from plastic explosives and detonated by timers killed at least 257 people, while the terrorists also threw grenades at Mumbai airport.


Ten years later, bombings killed another 50 people, while in July 2006, seven bombs were set off on rush-hour trains during a period of 11 minutes, claiming 209 lives.   Police blamed an outlawed Indian Muslim organisation, Lashkar-e-Toiba (‘Soldiers of the Pure’), but said the outrage had been planned by Pakistan’s intelligence agency, the ISI.


A trial of 13 people accused of involvement is still wending its way through the Indian justice system, with judgment now expected before the end of the year.
Posted by John Withington at 15:44 No comments:

Up to 110 people, including 50 children, have been drowned after an overloaded tourist boat sank on the Volga River in Russia.   The vessel’s official capacity was only 120, but it was said to have been carrying 208 people.
The 55 year old Bulgaria went down in minutes after being caught in a storm, while it was en route from Bolgary to Kazan, and the Russian authorities have launched a criminal investigation into the disaster amid reports that one of the vessel’s engines was not working.
President Medvedev has ordered safety checks on ‘all means’ of passenger transport, saying the Bulgaria was in a poor state, and that Russia had too many ‘old rust tubs’.
Back in the 1980’s after a series of dreadful accidents in the former Soviet Union, including Chernobyl and a gas explosion by the Trans-Siberian Railway, President Gorbachev complained that too many resulted from ‘negligence, irresponsibility and a lack of proper organisation’.    It looks as though his successor believes that problem is far from being solved.
Posted by John Withington at 18:57 No comments:

This day…..326 years ago saw the last battle (touch wood!) fought on English soil.    The rebel army of Charles II’s illegitimate Protestant son, the Duke of Monmouth, was decisively defeated by the forces of his uncle, the Catholic King James II, at Sedgemoor in Somerset.


The battle was followed by a ferocious campaign of repression in the West Country.   The royalist commander set up a line of gibbets along the road to Bridgwater, and hanged a captured rebel from each one.   Monmouth was found disguised as a shepherd and beheaded.


Next Colonel Percy Kirke, and his fearsome soldiers ironically nicknamed ‘Kirke’s Lambs’, summarily executed another 100 during the course of a week, before he was recalled for being too lenient.   So in early September, Judge Jeffreys set out on his ‘Bloody Assizes’.


Jeffreys’s speciality was abusing and terrifying defendants and any witnesses who spoke up for them – ‘lying, snivelling, canting Presbyterians’ and that kind of thing.    Altogether, he hanged more than 300, and had more than 800 transported.     Three years later, James II was fleeing the country, as he was deposed by William of Orange.
Posted by John Withington at 10:10 No comments:

Eighteen children and a teacher have been killed after lightning struck a school in the Masindi area of Uganda.     It is the second time the Runyanya Primary School has been hit.    In 2001, a lightning strike injured three people.
Across Uganda, another 12 people have been killed by lightning during the last week.   Meterologists say the reason for the strikes is a surge of moist air coming through the Congo Basin, but the government has also admitted that many buildings are not fitted with lightning conductors.
Perhaps the deadliest ever incident involving a lightning strike came in 1769 at Brescia in Italy, when the Church of St Nazaire was struck, setting fire to 100 tons of gunpowder stored in its vaults.    The resulting explosion is said to have destroyed a sixth of the city, and killed 3,000 people.
More recently, in November 1994, fuel tanks were struck at Dronka in central Egypt.     469 people died in the explosion that followed.
Posted by John Withington at 07:27 No comments: