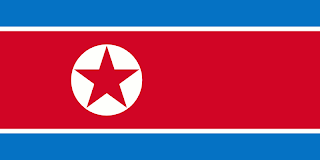 The rumpus over showing the wrong flag at the North Korean women’s opening Olympic football match (above is the one that should have been used) reminds us that 59 years after an armistice, there is no peace between North and South Korea.     Today is the anniversary of that armistice.


The Korean War is seen as the first Cold War conflict.    At the end of World War Two, the Americans occupied the southern half of the peninsula and the Soviet Union the northern end, where they established a Communist regime.     War broke out in 1950.


A United Nations force dominated by the Americans, but including also troops from the UK and 20 other countries, fought against the Chinese and North Koreans.   The US had nearly 40,000 of its servicemen killed, and South Korean military losses were around 46,000, while perhaps 200,000 North Koreans and 400,000 Chinese troops were killed.


Both sides committed atrocities against civilians.   In areas it occupied, the North Korean army executed all the educated people it could find, while the South Korean regime killed left-wing and communist sympathisers.      Total civilian deaths are estimated at up to 3 million.
Posted by John Withington at 10:24 No comments: 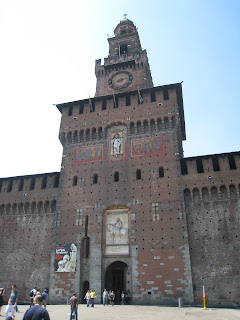 Just back from Milan and a visit to the magnificent Sforza Castle.   It was originally built by the Visconti family in the fourteenth century, but when they fell from power in 1447, the Milanese people declared a republic and tore it down.
Three years later, with the new republic at war with Venice, the great military commander, Francesco Sforza, took power, and rebuilt the castle.   The family established a new dynasty, and employed Leonardo da Vinci as an artistic factotum, enabling him to paint The Last Supper in the city.


In the late 15th century, the French invaded Italy, and sparked off decades of war.   Louis XII drove out the Sforzas and took over the castle.    It was still under French control in 1521 when lightning struck the Filarete Tower (pictured), which was being used as a gunpowder store.    The resulting explosion demolished the tower, seriously damaged the castle walls and killed many people.


It was rebuilt by the last of the Sforzas, Francesco II, but by the mid-19th century, the castle had fallen into such a poor state of repair that some people wanted it demolished.   Instead a lengthy restoration project ensured that it survived.
Posted by John Withington at 07:55 2 comments: 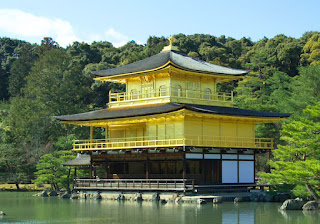 The latest country to face deadly floods is Japan, where at least 27 people have been killed.   Most of the deaths came on the southern island of Kyushu, where rain was falling at the rate of nearly four inches an hour, causing landslides and flash floods.


The authorities said that in the city of Yame, a 70 year old man inspecting his paddy fields was killed in a landslide while an 83 year old woman perished when her home was buried in mud.


About 100 homes were flooded in Kyoto, and there were worries about the famous Golden Pavilion (pictured) when the waters overflowed into the pond by which it stands, but the building escaped serious damage.


A quarter of a million evacuees are now beginning to return to their homes, though the Japan Meteorological Agency is warning that more heavy rain may be on the way.


*Here’s a report I did for BBC Television’s Top Gear programme back in 1993. http://www.youtube.com/watch?v=PWSBD3ji6OE
Posted by John Withington at 15:41 No comments:

More than 100 people are believed to have been killed after a petrol tanker crashed near the village of Okogbe in southern Nigeria.    Many of the victims are thought to have rushed to the scene to try to collect fuel that had spilled onto the road.


The tanker is reported to have collided with three other vehicles, but it did not burst into flames immediately.    By the time it exploded, it was surrounded by people.  The authorities say that 95 bodies have been recovered so far, but it is believed that many more have died.


Nigeria has been the scene of a number of disastrous tanker crashes.   Back in 2000, a tanker that had been poorly maintained careered into a traffic jam on the motorway from Ife to Ibadan. It exploded in a huge fireball, destroying more than 100 vehicles and killing up to 200 people.

*A new reivew of my book Historia Mundial de los Desastres -
http://libros-san-francisco.blogspot.co.uk/2012/06/libro-historia-mundial-de-los-desastres.html
Posted by John Withington at 12:50 No comments:

Bangladesh, India - now it is Russia’s turn to be hit by deadly floods caused by torrential rain.    At least 170 people have been killed in the Krasnodar region, way down in the country’s deep south.


11 inches of rain fell in just one night, bringing the worst flash floods in living memory, and forcing many people to shelter on roofs or in trees, as more than 5,000 homes were flooded.


Most of the deaths happened in and around the town of Krymsk, but deaths were also reported from the Black Sea resort of Gelendzhik and the port town of Novorossiysk.   Local people complained that they were given little or no warning.


Activists have blamed the ferocity of the flood on the opening of sluice gates at the local reservoir, though the authorities have denied this.    Now President Putin has ordered an inquiry into the causes of the disaster.
Posted by John Withington at 10:36 No comments:

Last week (June 28), I blogged about the floods in Bangladesh.   Now it has been revealed that monsoon floods in India have claimed more than 230 lives.  India’s Prime Minister, Manmohan Singh, has described the floods as among the worst of recent years.   In some areas, they are said to me the most severe in more than 60 years.


At least 95 people have been killed, and nearly 2 million made homeless in Assam in the far north-east of the country.   The Brahmaputra river has overflowed, inundating more than 2,000 villages and destroying many homes.


Most of the victims were swept away by the waters, though 16 were reported to have been buried by landslides unleashed by the heavy rains.   Nearly half a million people are now living in relief camps, while some are simply taking shelter on higher ground.


Military helicopters have been dropping drinking water and food, while soldiers are using speedboats to rescue people stranded on rooftops.   The government has announced immediate aid of $90m for the stricken areas.
Posted by John Withington at 10:02 No comments: