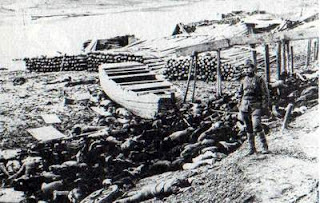 A Chinese-Japanese judo event due to have been held in the Chinese city of Nanjing has been cancelled following a Japanese politician’s denial of his country’s notorious ‘Rape of Nanjing’ in 1937.    The Mayor of Nagoya, Takashi Kawamura, said only "conventional acts of combat" had taken place.
Nanjing and Nagoya were twinned in 1978, but now the Chinese have suspended all exchanges between the two cities.    This is the latest in a series of remarks by leading Japanese politicians that indicate a reluctance to face up to the crimes committed by the country during World War Two.
The Japanese took Nanjing in December 1937.   Women and girls aged 10 to 80 were abducted for systematic rape and usually murder, civilians were shot down in the street, captured soldiers were burned alive or tied up and used for bayonet practice, or ripped to pieces by dogs.   Others were machine-gunned, beheaded, or buried alive.
In just a few weeks in December 1937 and January 1938, the International Military Tribunal of the Far East, reckoned the Japanese killed more than 260,000 non-combatants in the city, though some believe the real number was 350,000.   For the full story, see A Disastrous History of the World.
Posted by John Withington at 16:09 No comments: 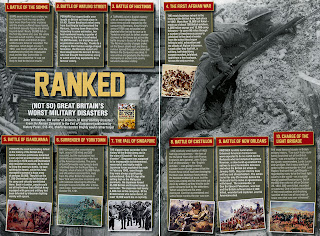 The death toll in the Honduras prison fire has now reached 359, making this probably the most disastrous prison fire in history.    Preliminary inquiries suggest that it was an accident caused by a cigarette.   Initial reports that the blaze was started deliberately are now being dismissed.
American inspectors say the gaol was overcrowded and that it contained too much inflammable material.   Relatives who stormed the morgue where the bodies of their loved ones were being held, claim to have seen evidence of bullet wounds, though the authorities have denied that any prisoners were shot.
Honduras has the highest murder rate in the world, but many of the prisoners at Comayagua had not been convicted and were awaiting trial.   Last year the US State Department said that many inmates in Honduras’s gaols suffered from malnutrition.
This is the third major prison fire in the country in just 9 years    In 2003, 70 inmates were killed at another prison, and in 2004 the death toll was more than 100 at a third.    Human Rights Watch say that following the fires: ‘everybody feels pretty sorry for a few days.’    Then presumably the feeling passes.
Posted by John Withington at 10:35 No comments:

Perhaps the deadliest prison fire in history has claimed the lives of at least 300 inmates at Comayagua in Honduras.    A further 56 of the 853 prisoners are still missing.
The fire broke out late on Tuesday night, and it took more than an hour before it was brought under control.  The cause is still unknown.  Dozens of prisoners died trapped in their cells while police fired tear gas at relatives who tried to force their way in.
Firefighters say they were unable to free inmates because they did not have keys to their cells and they could not find the guards who did.  The Honduran President has promised a 'full and transparent' investigation.
The disaster looks set to become the deadliest prison fire ever.    The worst until now happened in America’s Ohio State Penitentiary at Columbus, where more than 320 inmates were killed in 1930.
(see also my blog of Dec 9, 2010)
Posted by John Withington at 18:56 No comments: 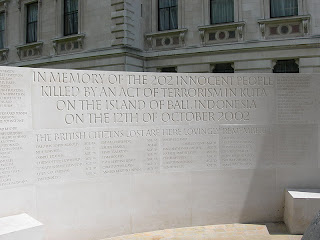 A 45 year old Javanese man has gone on trial in Jakarta for allegedly helping to make the bombs that killed more than 200 people in two night clubs in Bali in 2002.    Umar Patek was captured in the same town in Pakistan where the Americans tracked down Osama bin Laden.

He is also charged with involvement in a series of bombings in churches in Jakarta that killed 18 people.   If convicted, he could face the death penalty.

The prosecution claim Patek was recruited for the attack by Imam Samudra and Abdul Matin, better known as Dulmatin.   Samudra was executed in 2008, along with Ali Ghufron and Amrozi Nurhasyim, dubbed the ‘smiling assassin’ because of his demeanour at his trial, while Dulmatin was killed in a police ambush in 2010.

It is alleged that Patek spent three weeks mixing the explosives in a rented house in Bali’s capital, Denpasar, then helped another bombmaker, Dr Azahari bin Husin, to assemble a huge van-bomb.    Husin was killed by Indonesian police in 2005.
Posted by John Withington at 16:18 No comments:

The growing cost of disasters 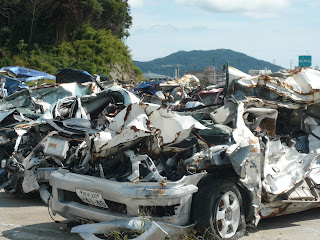 The Economist ran a fascinating piece in its January 14 edition on the growing cost of disasters.   Five of the ten most expensive disasters in history have happened in the last four years, and a leading reinsurer, Munich Re, reckoned 2011 was the most costly year in its history.
The most expensive disaster ever is last year’s Japanese tsunami, followed by Japan’s Kobe earthquake of 1995, and Hurricane Katrina in 2005.   Most expensive does not mean highest number of casualties.      The Japanese tsunami cost fewer than 16,000 lives, Kobe 6,400 and Katrina 1,300, compared with a quarter of a million killed in the Boxing Day tsunami of 2004, and perhaps a similar number in the Haiti earthquake of 2010.
One reason for the growing cost of disasters is that there are more and more human beings around to suffer losses.   The population of hurricane-belt state Florida, for example, has risen from 2.8m in 1950 to 19m now.
And overall human beings are getting richer so there are more things to be destroyed, while sometimes not enough thought is given to where development takes place.   Thailand’s growing industries, for instance, have been located in areas known to be vulnerable to flooding.
Posted by John Withington at 10:22 No comments: 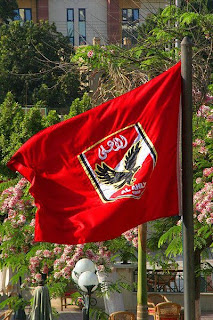 At least 74 people have been killed and hundreds injured in a riot after a football match between two of Egypt’s top teams - Port Said’s al-Masry and Cairo’s al-Ahly (flag pictured above).   Al-Masry won the game, and at the final whistle their fans invaded the pitch and attacked rival players and supporters, while part of the stadium was set on fire.
Although some rioters were said to have been armed with knives and metal bars, most injuries appear to have been caused by a stampede of spectators desperate to escape from the ground.
Some observers are claiming that the normal police presence for a match of this kind had been scaled down, and there are theories that there may have been some kind of concerted attack on al-Ahly fans, who are seen as having been in the forefront of recent protests against the security forces.
The world’s worst football disaster came in Lima in 1964, when a goal was disallowed in the last minute of an Olympic qualifying match between Peru and Argentina.   More than 300 people died as a riot in the stadium spread into the centre of the city.     There too, many of those killed were crushed trying to escape the trouble.
(See also my blogs of February 6 and March 30, 2009, January 2, 2010.)
Posted by John Withington at 10:02 No comments: