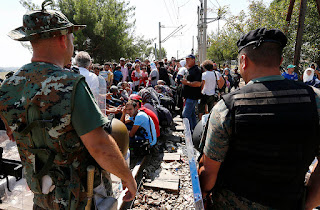 Last month, more than 218,000 migrants reached Europe by sea according to the United Nations – about the same as the number for the whole of 2014. More than 10,000 arrived in Greece alone on a single day. So far this year, nearly 3,500 are estimated to have died trying to get to Europe.

The vast majority have come via Turkey to Greece. This has replaced the route to Italy via Libya which used to be more popular. The highest number come from Syria – about 53 per cent, with Afghanistan next – 18 per cent.

The United Nations has been heavily critical of Europe’s response, but the organisation’s own predictions for the number of migrants expected have been gross underestimates. It forecast 700,000 for the whole year, but at the end of October with two months still to go, that figure had already been exceeded by 44,000.

Normally the numbers fall during the winter months, but that may not happen this year as the people traffickers seem to be offering bad weather discounts. The fact that some of the Islamic fanatics who carried out the mass murders in Paris apparently slipped into Europe as ‘refugees’ has heightened alarm.

Posted by John Withington at 11:14 No comments: 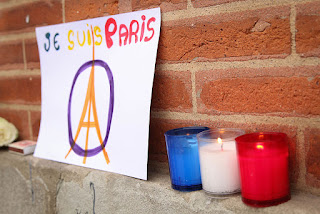 But that was only one of a spate of recent Islamist attacks across a number of countries. In Beirut, ISIS said it carried out two suicide bombings that killed 40 people. In Nigeria, more than 40 people died in bombings by Boko Haram, which killed more than 6,640 in 2014, making it the world’s deadliest terror organisation.

In Mali, 20 people perished in an attack on a hotel claimed by two Islamist groups, one affiliated to al-Qaeda, while ISIS claims it brought down the Russian airliner that crashed in Sinai on October 31 with the loss of 224 people.

Just today, suicide bombers, suspected to be from Boko Haram, claimed another four victims in Cameroon. It is not only the dead and injured of Paris that we need to remember.

Posted by John Withington at 17:48 No comments:

Friday the 13th: is it really unlucky? 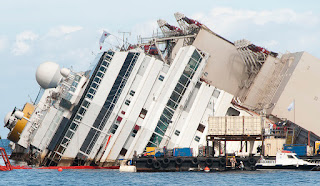 On Friday, 13th November, 1970, the deadliest storm in history devastated Bangladesh, with some estimates putting the number killed at as high as a million. And that was just one of the disasters that happened on this feared date.

On Friday, 13th October, 1307, scores of members of the elite military Knights Templar order, who had played a crucial role in the Crusades, were arrested by Philip IV of France and accused of heresy, blasphemy and vice. After the authorities extracted confessions by torture, the order was dissolved in 1312.

On Friday, 13th November, 1972, a Fairchild FH-227D on charter from the Uruguayan Air Force crashed in the Andes. 29 of the 45 people on board died. It took more than two months to rescue the remaining 16, some of whom had to survive by eating the dead. Their story was told in the feature film, Alive.

Then on Friday, 13th January, 2012, the Italian cruise ship, Costa Concordia, (pictured) struck a rock and capsized off a little Tuscan island with the loss of 32 lives. All nasty things to happen, but statistically enough to brand Friday the 13th as any worse than any other date? Well, funnily enough, a study in the British Medical Journal in 1993 apparently concluded that you might expect a higher than average rate of road accidents on Friday, 13th.

Posted by John Withington at 11:04 No comments: 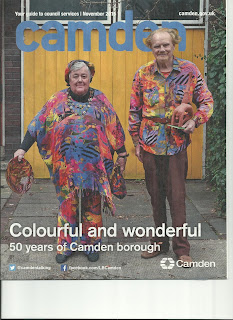 The London Borough of Camden has been running a photo competition to mark its 50th anniversary, and this is the winner - a picture of two of her neighbours taken by the very talented Anne Clements.

Well done! Now her picture is gracing the cover of Camden's magazine.

The 400 entries included a variety of Camden people, and scenes - such as the Regent's Canal at sunset, the bottom of Camden High Street in snow, and a wittily titled 'watercolour' of a railway bridge in the rain.
Posted by John Withington at 18:35 No comments:

The Bradford City fire: was it arson? 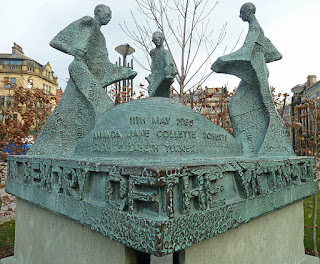 More than 30 years since the Bradford City fire in which 56 football fans died, a dramatic new development. West Yorkshire Police has referred itself to the Independent Police Complaints Commission over its investigation into the blaze.

This follows a meeting with Martin Fletcher, whose father, brother, uncle and grandfather, all died at Valley Parade on 11 May 1985. In his recent book, Fifty-Six: The Story of the Bradford Fire, he claimed the fire was one of nine that had happened at businesses linked with the club’s then chairman, Stafford Heginbotham.

The official inquiry had concluded the blaze was caused by a discarded cigarette setting fire to rubbish that had accumulated over years under an old timber stand. The structure was engulfed in minutes, and because doors at the back were locked, many spectators could not escape.

The police say Mr Fletcher’s book has raised ‘serious issues’, and that it is important that they are addressed.

For more on the fire, see A Disastrous History of Britain.

Posted by John Withington at 15:45 No comments: