Honduras has declared a state of emergency following the deaths of 16 people in an outbreak of dengue fever. Altogether more than 12,000 people have been infected with the virus that is borne by mosquitoes.
The disease causes flu-like symptoms and occasionally develops into a potentially lethal form called haemorrhagic dengue. Honduras’s worst outbreak happened in 2010, when 83 people died.
Earlier this year, the authorities in Brazil reported a steep rise in cases of dengue, with more than 200,000 people infected compared with 70,000 in the same period of 2012, though the health minister said most cases were less severe.
The World Health Organisation says that across the world there are 30 times as many cases as there were 50 years ago, with up to 100 million infections a year in more than 100 countries.
Posted by John Withington at 16:13 No comments:

Following the poisoning of 23 schoolchildren in the Indian state of Bihar by a contaminated free school meal (see my blog of July 18), teachers in the state have announced they are boycotting the lunch service.


After the deaths, students at a school in the Nawada district of Bihar beat up their teachers, complaining about the quality of the food. Meanwhile it has been revealed that high levels of an agricultural pesticide was found in the fatal lunch dispensed in the village of Dharmasati Gandaman.


The authorities say they are still trying to find the school principal who is wanted on suspicion of criminal negligence.


About 120 million children in 1.2 million schools benefit from the free meals scheme, but teachers complain about corruption and poor quality food. The state says it cannot afford to hire other workers to implement the scheme.
Posted by John Withington at 11:26 No comments:

Bangladesh - the war goes on

It is more than 40 years since the brutal war of independence that allowed the new nation of Bangladesh to emerge from what had been East Pakistan. In that war, up to three million people died.


Now Bangladesh is torn by riots over the conviction of two leading politicians for collaborating with the Pakistan army to target pro-independence activists during the struggle. The spiritual leader of the Islamist Jamaat-e-Islami party, Ghulam Azam, has been sent to gaol for 90 years, while another leading member of the party, Ali Ahsan Mohammad Mujahid, has been sentenced to death.


The verdicts were handed down by the International Crimes Tribunal in Dhaka, set up in 2010 by the current government led by the Awami League. Two people have been killed in riots this week, and 100 so far this year.


Mr Mujahid was a student leader in 1971 who wanted to keep Bangladesh part of Pakistan. His party claims the trials are politically motivated, while Human Rights Watch has described them as "flawed".
Posted by John Withington at 18:48 No comments:

Twenty-three children have died in the Indian state of Bihar after eating a contaminated school meal. Another 24 are ill. A doctor at the local hospital said that a chemical used in pesticides was the most likely culprit.


Some of the surviving children are said to have vomited after the first bite of the food, while others spat it out because it was too bitter. The Bihar State Education Minister said the cook had complained about the cooking oil, but the headmistress had insisted it was safe to use.  The headmistress is said to have fled.


Angry parents in the village of Dharmasati Gandaman demolished the school kitchen and set fire to police vehicles. The government provides 120 million free school meals for poor children, but the scheme is often criticised for poor hygiene.


One of the worst mass poisonings in history happened in Iraq in the early 1970’s when villagers made bread from imported grain designed for planting, not eating, and treated with a deadly fungicide. Up to 6,000 died.
Posted by John Withington at 18:36 No comments:

Canadian police now believe that about 50 people were killed in Saturday’s train disaster in Quebec. So far, 20 bodies have been found after a runaway train carrying 72 tankers of oil was derailed and then exploded at Lac-Megantic.


At least 30 buildings were flattened, and about 2,000 people had to flee from their homes.  The chief executive of the train operating company says they believed the driver had failed to apply a set of hand brakes.


The operating company also suggested that firefighters bore part of the blame after they were called to put out a fire on the train late on Friday night as it was parked about 7 miles from the scene of the accident.


One of the most disastrous train explosions of all time came on the Trans-Siberian Railway on June 4, 1989, when leaking gas from an oil pipeline ignited as two trains were passing near the town of Ufa. One train was blown into the path of the other, and over 3 miles, the landscape was turned into a wasteland, while up to 800 people died.
Posted by John Withington at 15:40 No comments: 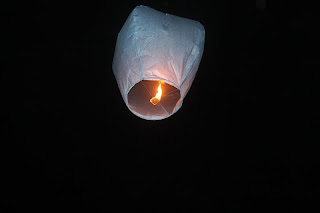 On New Year’s Eve a few years ago, I stood on London’s Primrose Hill and enjoyed what was then the novel sight of a procession of Chinese lanterns floating beautifully through the night sky, without worrying too much about where they were going to come down.


Now it seems a Chinese lantern has descended in a wrong enough place to cause what some are describing as the worst fire ever in England’s West Midlands, a blaze at a recycling plant that occupied 200 firefighters and caused damage estimated at £6 million.


About 100,000 tons of plastic caught fire at the depot near Smethwick on Sunday, and a few firemen are still at the scene today.  A Liberal Democrat MP has now demanded a ban on the lanterns, and the local council has asked shops to stop selling them.


Their sale is already banned in Australia, while in most parts of Germany, it is illegal to launch them, as it is in South American countries such as Argentina, Brazil and Chile. They are also prohibited in the city of Sanya - in China.
Posted by John Withington at 18:33 No comments: 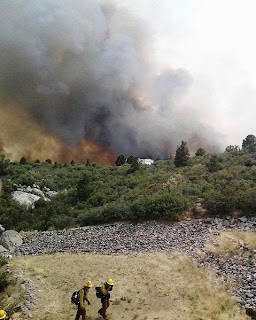 An inquiry has begun into the deaths of 19 crack American firefighters in a forest fire at Yarnell Hill, Arizona. It was the worst death toll among US firemen since 9/11.


Altogether about 450 firefighters took on the blaze which destroyed 50 buildings and forced hundreds of people to flee their homes. It came during a heat wave which took temperatures close to all time record levels.


The victims belonged to a 20-man unit known as the Granite Mountain Hotshot crew, which had been trying to clear brush and trees that the flames were feeding on.  Only one member survived.


Perhaps the deadliest forest fire ever happened in Wisconsin in 1871. It began in the woods, but was carried on the wind to the lumber town of Peshtigo, where the sawdust that always clogged the streets provided ready fuel for the flames.  The whole town was burned to the ground and more than 1,150 people lost their lives. For the full story, see A Disastrous History of the World.
Posted by John Withington at 17:44 No comments: