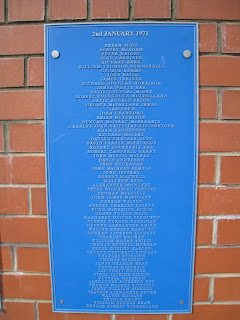 On this day….39 years ago, two goals in the last couple of minutes of the traditional New Year Glasgow football derby between Rangers and Celtic at Ibrox Park precipitated a disaster. Crowds drifting away early suddenly turned and tried to go back into the ground.

The result was a terrible crush on Staircase 13 in the north-east corner of the stadium. As fans began falling, one eyewitness said it was as though people were “disappearing down a big hole.” People in the crush talked about being literally swept off their feet and carried along until there was a big bang and one of the banisters gave way.

Soon the steps were covered with the bodies of the dead and injured and with shoes and items of clothing torn off in the melee. Altogether 66 people were killed in what was then the worst disaster at a British football ground. Today there is a memorial at the ground and you can read the full story of the disaster in A Disastrous History of Britain.

Probably the worst football disaster of all time came at the Olympic qualifying tie of May 24, 1964 between Peru and Argentina in Lima. More than 300 people were killed when a riot broke out after Peru had a “goal” disallowed. See also my 2009 blogs of January 13 and March 30.
Posted by John Withington at 19:00