Brexitwatch: this wasn't meant to happen Part 4: inside DUP headquarters 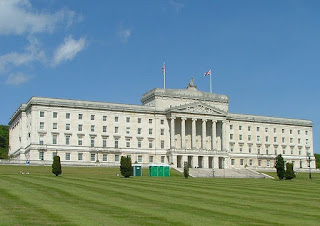 When the Good Friday Agreement was signed, people said: 'the Republicans are too clever to admit they've lost, and the Loyalists are too stupid to realise they've won'. This may appear to have been confirmed by the DUP's apparently foolish decision to support Brexit, which has done more damage to the Union in 4 years than the IRA managed in 30. Fortunately, I can reveal that all this is scurrilous nonsense thanks to a recording secretly made at DUP headquarters of a wide-ranging 58 second long debate on the stance the party should take in the Brexit referendum.

'How many Papists are there in the EU?'

'Hmm. What are the Fenians going to do?'

[Loudly and hastily]. 'Yes thank you. Well the Good Friday Agreement only works if both Northern Ireland and the Republic are in the EU.....'

[Interrupts] So what are they saying on the Shankill?

'They tend to back Leave.'

'So Leave it is. Next business.'

'But hang on. If we leave the EU and "take back control of our borders", there'll have to be a border in Ireland between the UK and the EU. Now we can't have a land border because that would break the GFA, so that means a border in the Irish Sea between Northern Ireland and the rest of the UK.'

'That means the end of the Union! A de facto United Ireland.'

'It won't, because Leave won't win in a month of Sundays. Remain'll win, but we'll get credit for giving the Papist EU a kicking. Leave it is. Next business.'

Posted by John Withington at 17:06