Brexitwatch: a (sort of) reply from Sir Keir Starmer 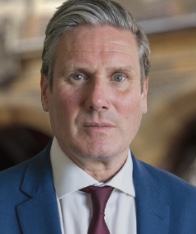 The story so far: I wrote to Labour leader, Sir Keir Starmer, who is also my MP, urging Labour to oppose Boris Johnson's disastrous Brexit 'deal', because supporting it would mean Labour would be tainted with its damaging consequences and would be disqualified from complaining about them (see my posts of 6 and 27 December). As you know, Labour whipped its MPs to support the deal and the vast majority obeyed. The main excuse being that if Labour opposed it, there was a danger of 'no deal', even though the deal would have passed comfortably without Labour votes.

I have now finally received a reply - not from Sir Keir, but from 'Lee' of the Labour Party. I will be responding but I would be interested in any thoughts readers have before I do. Here it is:

Thank you for your email to Keir Starmer MP in relation to Britain’s withdrawal from the E.U. At this point in time, Keir’s mailbag is so full that he has asked me to respond on his behalf. I’m very sorry for the delay in getting back to you.

Your strong views, arguments and observations have been duly noted and shared with the relevant policy teams.

The old divides of Remain and Leave are over. We now have two options: Johnson’s flawed trade deal with the EU, or the chaos of ending the transition period with no deal, which would mean substantial tariffs and barriers to trade. Neither one is ideal. Neither one will deliver for jobs, business or the economy.

We have always said that to crash out with no deal would be unthinkable. It would have created enormous uncertainty, endless negotiations and inflicted huge damage to businesses in highly exposed sectors, including manufacturing and farming.

With no option of renegotiating left, that is why we voted in the national interest by rejecting no deal.

Voting for this deal does not mean we welcome it: it is a choice between this and no deal. This is the better option for business, supply chains, the economy and jobs. This deal will provide some stability and certainty for businesses. Without it, we would have had no deal which would have meant investment and jobs lost across crucial sectors.

But, this is Johnson’s deal. He and his Government will own it and they must take full responsibility for their slowness and lack of preparedness – and for the promises they make and break. There was no reason that a deal this unambitious for the UK had to be left until the final days of the transition period. The decision to delay this deal has already done unnecessary damage to businesses and the economy.

Moreover, this deal falls far short of what the Government promised. It neglects services, which account for 80 per cent of our economy, and weakens our security measures. There was very little time for Parliament to scrutinise the deal properly because of the speed it must be passed as to avoid no deal. So much for ‘taking back control’ – this Government is arriving at the last minute with a deal that is more ‘be grateful you’ve got anything’.

More holes will be exposed in the coming weeks and months which must be mended in the future. Labour in Opposition and government would focus on improving and building on it and standing up for the country’s interests. This Government must now get into action and properly support British industries adjusting to new trading rules, building up local supply chains and expanding in to new markets, instead of casting them to one side as they have over recent months.

Labour are focussed entirely on making this the best country to grow up in and the best place to grow old in. This biggest challenges facing our country and our planet require co-operation and international solutions, and a Labour government will work with others with shared values to tackle those.

However, with the trade deal agreed, the task of securing the economy, protecting the NHS, and rebuilding the country will only have just begun. A Labour government will build on the foundations of this deal, stand up against any Tory attempts to dilute workers’ rights and environmental standards, and make the United Kingdom the best place to grow up and the best place to grow old.

Posted by John Withington at 12:37