The comedian, the sculpture, the pop song, the book....and the assassins! 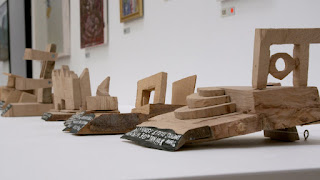 One of the exhibits at the 'Summer' Exhibition at London's Royal Academy is a collection of eight little wooden models by the comedian, Harry Hill. They carry clues - Ford's Theatre, Dealey Plaza.

Ah! I realised, fresh as I was from writing Assassins' Deeds. A history of assassination from Ancient Egypt to the present day. (Reaktion books) The little models all represent the sites of famous, or notorious, assassinations.

As I wracked my brains to identify them all, I could have saved myself some trouble by looking at the catalogue. The title of the piece is Abraham, Martin, John, Mahatma, Leon, Che, Malcolm and John. So Abraham Lincoln, Martin Luther King, John F. Kennedy, Mahatma Gandhi, Leon Trotsky, Che Guevara, Malcolm X, and John Lennon.

Is Hill's poignant piece inspired by the 1968 pop song Abraham, Martin and John, which was a hit for Dion? That mourns the deaths, and celebrates the lives of Lincoln, Martin Luther King and JFK, and concludes with the assassination of Bobby Kennedy.

Posted by John Withington at 18:54