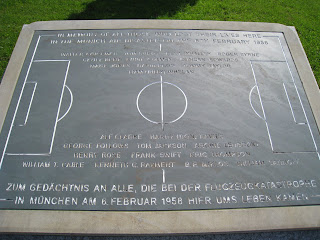 For some Munich means 1938, but for a Mancunian like me, it will always be associated with 1958. Fifty-one years ago today, an aircraft carrying the Manchester United team home from a European Cup tie in Belgrade crashed at Munich, killing 23 people including 8 Manchester United players. (Above is the memorial at the old Munich airport which was beautifully maintained when I saw it last year, and a great credit to local people.) In addition to the eight killed, two others – Jackie Blanchflower and Johnny Berry – would never play again, and two more – Kenny Morgans and Albert Scanlon – would never be the same again.

It truly was – in the title of a famous book by crash survivor Frank Taylor – The Day a Team Died. One of the most striking things about the players who perished was how young they were – Eddie Colman – 21, David Pegg – 22, Mark Jones – 24, Billy Whelan – 22. Then there was the England triumvirate – the captain Roger Byrne – formidably experienced, but still only 28; Tommy Taylor, 26 – scorer of 16 goals in 19 internationals, and Duncan Edwards – just 21. Duncan was as brave as George Best, he could read a game like Bobby Moore, tackle like Tommy Smith, shoot like Bobby Charlton and was almost certainly destined to be one of the greatest players of all time.

Young though they were – they were already being challenged for their places by the next generation of talent – notably Bobby Charlton, who was to become perhaps the finest footballer England has ever produced, but also Morgans and Scanlon. You could expect the team to go on improving for at least the next five years, and yet they had already won the League Championship (the equivalent of today’s Premiership) for the past two seasons, and had just reached the semi-final of the European Cup (the equivalent of today’s Champions’ League) for the second time. I rarely watch a football match without pondering the unanswerable question of how good they might have become.

So a great team died, but the club didn’t, and today Manchester United stand top of the Premiership.
Posted by John Withington at 10:43