Brexitwatch: Labour too cowardly to have an opinion. My letter to the party's Brexit spokesperson 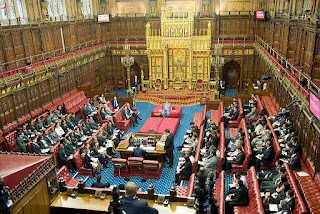 A crucial vote comes up in the House of Lords tomorrow, with a decision on an amendment that would require the UK to Remain in the EEA, meaning we would stay in the EU's Single Market and Customs Union.

And Labour's view? Incredibly Jeremy Corbyn has ordered Labour peers to have no view - to abstain - just as they did over an amendment to guarantee us all a vote on any deal agreed with the EU. The result was a win for Theresa May's extreme right wing Tories and their extreme Brexit.

My MP is Labour's Brexit spokesperson. This is what I have written to him. Do you know a Labour lord to whom you could write something similar?


Dear Sir Keir,
'Staying in the EEA could preserve our rights to live and work in 27 countries, stop our economy being destroyed, preserve peace in Ireland, and, of course, it wasn't mentioned on the referendum ballot paper, so any 'will of the people' arguments are irrelevant. What does Labour think?'
'Er, we don't really have a view.'
How on earth do you expect to be taken seriously as a potential governing party when you are too cowardly or too clueless to take a position on the biggest questions facing our country?
I was horrified to see Labour sabotaging the chance of a referendum on any Brexit terms by ordering its members in the House of Lords to abstain, so ensuring the most reactionary Tory government I have ever seen would get its way. Now you are planning to do the same on the EEA vote.
This is inexcusable. I urge you at this late date to change your mind and just for once, put country before party. Every Labour lord should be urged to support the amendment.
Yours sincerely,
John Withington
Posted by John Withington at 19:30