Brexitwatch: it's not just Theresa May. Are the police also running down the clock? 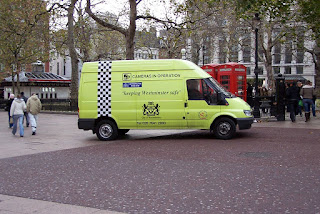 Last May - yes, 9 months ago, the police were given evidence of widespread law-breaking by the Leave Campaign in the 2016 referendum. In October, I wrote to the Metropolitan Police asking why they had taken no action (see my post of 15 October 2018). The Met replied:

The electoral commission has made referrals to the MPS. The special Enquiry Team are assessing a number of documents in order to make an informed decision as to whether a criminal investigation is required.

Since then another four precious months have elapsed and it is now just six weeks before we are due to leave the EU. A good reason, you might think, for the Met to get its skates on. Instead - silence. So I have written to them again (see my post of 9 Feb). On 9 Feb, I got a reply saying:

Currently The document [sic] are being assessed by specialist investigators, supported with advice from the Crown Prosecution Service, in order to make an informed decision as to whether a criminal investigation is required.

Anyone who didn't know better might conclude the Met had done absolutely nothing and was just waiting for 29 March in the hope that if there was a criminal conspirancy, the criminals concerned would have safely achieved their objective, with their crime having paid, long before any 'investigation' got underway.

Then perhaps somebody at the Met spotted that they might not be creating the right impression, because on 11 February I got another reply, which seems to be a longer-winded way of saying the same thing: after 9 months and with Brexit six weeks away, the police STILL have not decided whether to mount an investigation:


The Electoral Commission has made two referrals to the MPS in relation to the EU Referendum regarding potential criminal offences under section 123(4) Political Parties, Elections and Referendums Act 2000.  The first referral was received on 11 May 2019 and concerns Leave.EU, the second referral was received on 17 July 2018 and concerns Vote Leave and BeLeave.
A referral from the Electoral Commission does not automatically mean a criminal offence has been committed, it is the role of the MPS to decide whether there is evidence of a criminal offence that requires investigations.

There has been reporting that the MPS enquiries have made no progress, inferring this was due to ‘political sensitivities’.  This is not the case.  Having received over 2,000 documents, it is absolutely imperative we assess the evidential material that is available in order to make an informed decision as to whether there are matters that require a criminal investigation by the MPS.

We will not provide a running commentary of how we are progressing our enquiries however as with previous referrals form the Electoral Commission, the MPS will make public the outcome of our assessment.
Posted by John Withington at 19:16