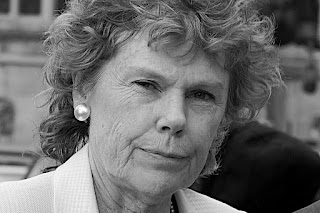 In this blog on 1 February, I posted the email I sent to the 14 Labour MPs who voted for Theresa May and against their own party on the Yvette Cooper amendment to prevent a disastrous no-deal Brexit. They obviously feel it's important we should face the dangers of food and medicine shortages, martial law etc (I wonder if any of them would like to apologise now Theresa May has double-crossed parliament again?)

Here's the reply I got from perhaps the most fanatically pro-UKIP Labour MP, Kate Hoey (London Vauxhall), and below it are my replies to her reply:

Thanks John I was pleased to join with 13 of my Labour  colleagues to help vote down the Cooper amendment which was designed to help thwart Brexit.  The country were told explicitly that there [sic] vote mattered and the result would be implemented. Indeed 8 million pounds spent on a Gov leaflet to every household saying exactly that. Parliament voted for the decision of the referendum to be honoured and also voted overwhelmingly to invoke Articke 50.It was also in our election manifesto that we would implement the referendum
I disagree with your dire warnings about the future outside the EU and look forward to being an independent  country co-operating with the rest of the world including our near neighbours in the EU.
Leave means Leave
Best wishes
Kate

'Leave means leave' eh, Kate? especially Honda and all the other companies who are quitting. Are you satisfied yet, or do you want to see more jobs lost and more closures?

I'm not sure how 'Sorry you lost your job and your public services, but it was the will of the people' is going to play. But you'll be pleased your old mate Theresa May has double-crossed parliament again. Expect you'll be supporting her as usual.

Dear Ms Hoey,
Why is it that when you put arguments to Brexiters, instead of engaging with those arguments, they just respond with the same empty slogans they've been trotting out for years? I suppose it's because they don't have any arguments.
1. You say Yvette Cooper's amendment was designed to 'thwart Brexit'. No. It was designed to prevent a no-deal Brexit. Something that anyone who cares about the UK should have been supporting.
2. It doesn't matter how much David Cameron spent on a leaflet. You Brexiters are dragging us out of the EU under the pretext of strengthening 'parliamentary sovereignty'. So you will know that parliament makes the law in this country, not a Tory Prime Minister. The 2016 referendum was explicitly advisory and non-binding on MPs. It offered bad advice, and it is the duty of all MPs to act in the national interest and reject it.
3. As I said in my email, the referendum result cannot be 'implemented' because the Brexit that you and your UKIP and Tory colleagues promised is not being and cannot be delivered. So the referendum result is of no relevance to the decisions MPs now have to make.
4. They are not my warnings. Virtually everyone who has examined Brexit seriously has concluded that it will make the UK poorer and, disgracefully, rob young people of the opportunities that people of our generation took for granted. Far from being more 'independent' outside the EU, the UK will be weaker and more dependent.
I note you decided to ignore the other points I made. I assume this is because you have no answers to them.
But if you intend to carry on helping Theresa May inflict her Far Right Brexit coup on the UK, I do not see how you can continue as a member of the Labour party.
Yours sincerely,
John Withington

Posted by John Withington at 18:23