A deadly storm and a deadly anniversary 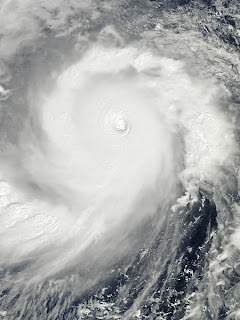 The strongest storms are not always the deadliest. It all depends where they strike. But Typhoon Haiyan has proved both strong and deadly. It has brought winds gusting at up to 170 miles an hour, and it has killed an estimated 10,000 people.

The worst hit area appears to be city of Tacloban on Leyte island in the Philippines, and the worst damage seems to have been done by the 45 foot waves the storm generated. More than 670,000 people have been driven from their homes.

The airport at Tacloban was damaged, at first preventing aircraft arriving to deliver supplies and evacuate survivors, but now the Philippines air force is getting transport aircraft in and out. Hundreds of thousands of people did leave before the typhoon arrived, but many evacuation centres were unable to withstand the winds and storm surges.

The deadliest storm of all time was probably the cyclone that hit Bangladesh 43 years ago today, on the night of November 12, 1970. Its winds peaked at 115 miles an hour as it devastated the low-lying islands of the Bay of Bengal, killing up to a million people. For the full story see A Disastrous History of the World.
Posted by John Withington at 18:17