Secrets of living to 100 and the world's oldest author 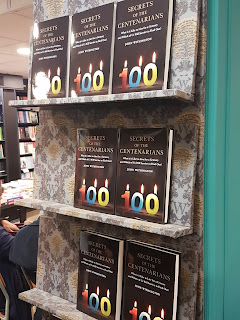 Interviewed this week by Debbie McCrory of BBC Radio Cornwall about my book Secrets of the Centenarians: what is it like to live for a century and which of us will survive to find out? and about the world's oldest working author. Here it is:-

Ida Pollock from Lanreath, near Looe, was reckoned to hold the title when she died aged 105 in 2013, just before the publication of her 125th book. She used ten different pseudonyms to write romantic novels, of which she sold over a million, with titles such as Hotel Stardust and The Bay of Moonlight.

She wrote her first book at the age of fourteen, and became a full-time writer in her twenties. Over one five-year period, she produced 40 titles, and said she could finish a book in six weeks.

Many of her romantic heroes were said to be based on her husband Lt-Col. Hugh Pollock, who had previously been married to Enid Blyton. He died aged 82 in 1971.

Secrets of the Centenarians is published by Reaktion Books.
Posted by John Withington at 14:28