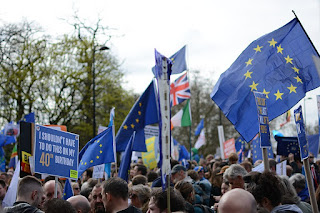 One of the most painful aspects of Brexit is listening to unscrupulous Labour Party spokespeople tying themselves in knots of bewildering complexity as they try to avoid answering the simple question: 'Does Labour back a referendum on any Brexit terms that are agreed?'

It is being reported that one of the main opponents of a People's Vote is Labour chairman Ian Lavery, the MP for Wansbeck. https://www.theguardian.com/uk-news/2019/apr/06/labour-chairman-attacks-corbyn-over-second-referendum-plan

If you want a referendum, write to him at ian.lavery.mp@parliament.uk.

This is what I have sent him. Feel free to borrow, adapt, etc

Dear Mr Lavery,
I am writing to you in your capacity as chairman of the Labour Party. I read that you are doing everything you can to prevent the British people being allowed to vote on the terms under which they are dragged out of the EU.
Well, if we leave the EU, I will not forgive Labour.
There is no longer any justification for Brexit:
1. Any Brexit will damage the UK and particularly the people Labour is supposed to care most about.
2. The referendum result is null and void as it was won by lies, cheating and criminality. (I am bitterly disappointed that Labour has tried to sweep this under the carpet - an act of foolishness and cowardice that will haunt the party for a very long time.)
3. The Brexit that people voted for is not being and cannot be delivered.
Labour's half-hearted opposition to the right wing Brexit coup has been a dreadful stain on the party's reputation, and if we are now dragged out of the EU, I will regard Labour as being as much to blame as the Tories. I trust the party will now do whatever is necessary to stop it.
If we do leave, I will not forget, and I will do everything I can to help defeat Labour in all subsequent elections.
There is still time to do the right thing, but it is fast running out.
Yours sincerely,
John Withington

Posted by John Withington at 15:42