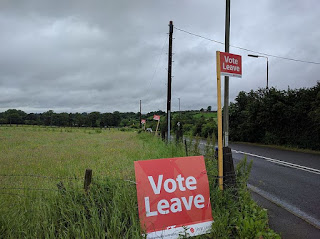 The Leave Campaign in the UK's EU referendum was the most mendacious, deceitful, inflammatory and irresponsible I have ever seen, so it was clear the wheels would come off if they won. But even I am surprised how quickly it has happened.

1. The economy will not be damaged. In fact, the pound crashed to its lowest level for more than 30 years, and job losses are already being announced.

2. David Cameron will stay on as Prime Minister. In fact, within a couple of hours of the result being announced, he had resigned.

3. The NHS will get an extra £350m a week if we leave the EU. Now the Brexit leadership says it will not. Their flagship promise was a ‘mistake’.

4. Leaving the EU will cut immigration. Now Brexit Conservative MEP Daniel Hannan admits this is not going to happen. They want to keep freedom of movement with Europe. In fact, as I have pointed out before, the anti-Europeans have no target for immigration, and it may well go up if we leave the EU.

It has been clear throughout the campaign that the Brexit leadership do not have a clue what to do if Britain leaves Europe, and a lot of Leave voters are already expressing their regret at the way they voted. In order to save Britain further damage, it is essential that the foolish threat to leave the EU is immediately withdrawn.

And write to your MP demanding they keep Britain in the EU.
Posted by John Withington at 12:23